'The scent of wood and polish filled her senses as she stepped inside. The hall seemed larger than it had appeared on the outside, the walls rising up to a dark ceiling high above. Several magic globe lights hovered under the rafters, filling the room with a golden glow. Rows of tiered wooden seats extended down the length of the building on each side.'

The Guildhall is where magicians of the Guild hold Meets, Acceptance and Graduation ceremonies and also Hearings. The Guildhall amplifies sounds in odd ways due to its conversion to a hall. It was the first building made and is the oldest Guild construction which had originally contained rooms to house magicians and their apprentices as well as space for lessons and meetings. Due to the rapid growth they had to construct more buildings, so they converted the Guildhall. 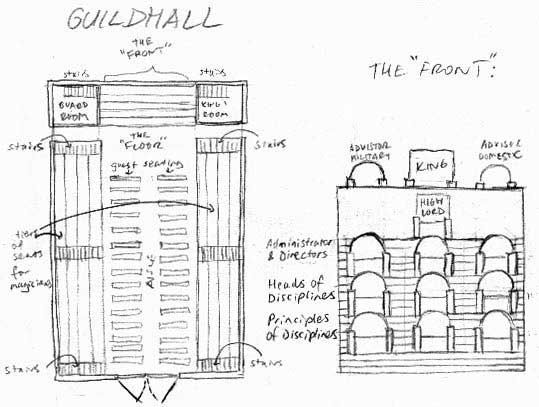 Retrieved from "https://canavansbooks.fandom.com/wiki/Guildhall?oldid=13752"
Community content is available under CC-BY-SA unless otherwise noted.