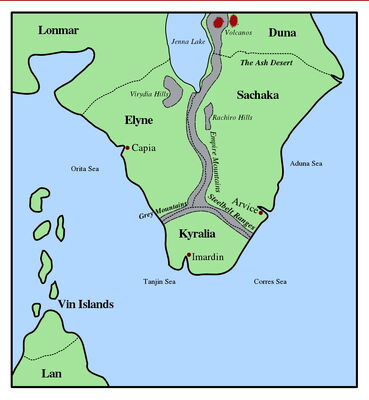 Vin (or the Vin Islands) is a warm-cool climate country which has a love for trade.

Vin lies south to Kyralia, with Lan to its south. It is made up of six islands and the mainland, however the northenmost islands are inhabited by outlaws. Vin's capital is Kiko Town and they are ruled by a monarchy.

Vin is a trade heavy country and the Shipbuilders and Trade Guilds have a strong influence due to trade being a major source of income. Vindo are short in stature with the men being often stocky and women petite. Typically they have pale brown skin, straight brown hair, and brown eyes, though sometimes amber. The vindo are easy-going people who love fesitivity. Typical names end in "-mo" or "-no".

Retrieved from "https://canavansbooks.fandom.com/wiki/Vin?oldid=14585"
Community content is available under CC-BY-SA unless otherwise noted.